We’re looking for a happy ending!

Twisk was found hiding in a shed with a huge open wound in the middle of his forehead. . The poor dog couldn’t open his eyes, he had no idea where he was and we have no idea how he got there or how long he’d been there.

Over the coming days, running into weeks he had a second surgery once the wound had healed. It looked amazing, then a skin flap using the skin from the top of his head was used to cover the area where the hole had been .

Today he has his sight, the skin flap is healing beautifully. He’s eating like a trojan, loves his food and has really begun to trust people and is even going for walks. Oh, and he enjoys having his hair combed, such an interesting lovable character with such a will to live who deserves the best home.

He’s touched many hearts and thankfully he has a foster home to go to. To make it a happy ending he needs a home for life . . . 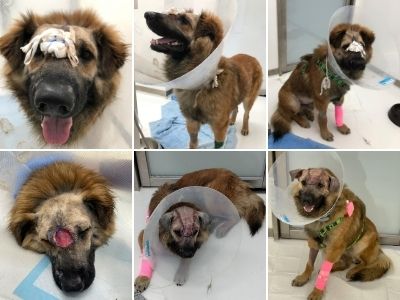