He was the original keepers favourite cat and I was personally most concerned about him as he struggled to settle when he was given up and spent most of his days hiding under blankets, towels and even the cat beds.

I stopped worrying when his now family went in to see him and instead of hiding as he’s done for weeks, to our amazement he was out from his hiding spot and mingling, actively seeking heir attention!

He had made his decision, he had his family and off he went without so much as a backward glance – way to go Munchkin xx 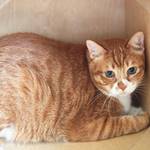